By understanding the behaviour that drove these settlements, hopefully, you can avoid the lengthy prison sentences some individuals received!

Whilst companies face multi-million settlement penalties, the consequences for individuals are even more severe, with fines of up to $2m and prison sentences of up to 20 years given out in 2021.

Biggest bribery fines in 2021 in detail

Deutsche Bank AG agreed to pay close to $125m to avoid being prosecuted in the States on charges of being involved in foreign bribery schemes and manipulating precious metals markets.

The vast majority of the payout is connected to charges regarding Deutsche Bank's violation of the federal Foreign Corrupt Practices Act (FCPA) over its dealings in Italy, Saudi Arabia, China and Abu Dhabi court papers show. Almost two-thirds of the payout is a criminal fine.

According to Acting US Attorney Seth DuCharme, "Deutsche Bank engaged in a criminal scheme to conceal payments to so-called consultants worldwide who served as conduits for bribes to foreign officials and others," to win and retain "lucrative business projects."

Telecommunications gear firm Ericsson has agreed with Nokia to pay a damages claim of €80m (£69m). This settlement follows investigations carried out by the US Department of Justice (DoJ) into corruption, including the bribing of government officials. It settled with the DoJ back in 2019 and was required to pay over $1bn (£709m) in penalties.

The DoJ said that Ericsson conspired with third parties to violate the US Foreign Corrupt Practices Act (FCPA) from at least 2000 to 2016 by taking part in a scheme to hand out bribes and falsify books and records, in addition to failing to implement adequate internal accounting controls.

According to Ericsson, the settlement would impact operating profit by €80m (£69m) and cashflow by €26m (£22.5m) in the second quarter of 2021, stating that "the amount reflects uncertainty, risk, expense, and potential distraction from business focus associated with a potentially lengthy and complex litigation."

Towards the end of April 2021, the Serious Fraud Office (SFO) in the UK had announced that a former subsidiary of Airbus SE, called GPT Special Project Management Ltd, had pleaded guilty to one count of corruption, which is contrary to Section 1 of the Prevention of Corruption Act, 1906.

The SFO had actually begun its investigations into the ways GPT worked in Saudi Arabia back in 2012. It found that GPT had paid bribes to the Saudi Arabian National Guard to win a £2 billion contract to provide military communications services.

Consequently, GPT was ordered to pay a confiscation order of £20.6 million, a fine of £7.5 million, and the SFO’s investigation costs of £2.2 million. This totals to £30.3 million worth of fines being ordered by the SFO.

The UK Serious Fraud Office (SFO) has secured convictions against Petrofac Ltd for bribes paid between 2011 and 2017.

Petrofac Ltd pleaded guilty to seven corporate counts of failing to prevent bribery by the senior executives of its subsidiaries. They used third-party agents to bribe officials in Iraq, Saudi Arabia and the United Arab Emirates paying them £32m to obtain oil and gas contracts worth over £2.5bn. Petrofac’s former Head of Sales, David Lufkin, was also convicted of 14 counts of bribery and was given a two-year custodial sentence, suspended for 18 months.

Lisa Osofsky, Director of the SFO noted that the Petrofac Ltd conviction shows: "The SFO will use all the powers at its disposal to root out and prosecute companies and individuals, whose criminal activity detrimentally affects the reputation and integrity of the United Kingdom."

The consequences for individuals guilty of bribery and corruption are severe with the penalties potentially including jail time. In 2021, individuals were issued hefty fines which were, more often than not, coupled with a prison sentence.

In early April 2021, Raymond Kohut, a former employee of an unnamed European commodities firm (reportedly to be Gunvor Group Ltd), pleaded guilty to one count of conspiracy to launder the proceeds of a scheme paying at least $22 million in bribes to officials at Petroecuador, Ecuador’s national oil company.

Kohut’s employer entered into agreements with a couple of Asian state-owned enterprises (SOEs) to market and sell oil products delivered under contracts. It had allegedly paid fees to two consulting firms to generate the bribe money, some of which was transmitted through the U.S. banking system.

Kohut faces up to 20 years in prison and has agreed to forfeit $2.2 million.

Jose Carlos Grubisich pleaded guilty on Thursday to two counts of conspiracy to violate U.S. anti-bribery laws, acknowledging that he approved a $4.3 million payoff to an official of the state-owned energy company Petroleo Brasileiro SA for the right to build and operate a plant.

The Serious Fraud Office (SFO) has ordered a former Unaoil senior executive to repay £100,000 – the same amount of criminal gains he obtained in his role in the Unaoil bribery scandal. The funds will be paid into the public purse.

Earlier this year, it came to light that the senior executive paid over $500,000 in bribes to secure a $55 million contract for Unaoil to supply oil infrastructure in Iraq. The Head of Proceeds of Crime and International Assistance at the SFO, Emma Luxton, stated: "The SFO relentlessly pursues those who line their own pockets with illicit gains, and we have a proud record of recovering funds; for victims and for the UK taxpayer."

The Unaoil investigation also led the SFO to a bribery scheme that was occurring at Petrofac. The latter company pleaded guilty to 14 counts of bribery, which included paying £32 million in bribes to secure over £2.6 billion in Middle East oil and gas contracts. The company's fine amounts to £77 million.

At the end of April 2021, a business executive based in Miami, USA, called Gustavo Adolfo Hernandez Frieri, was fined $50,000 and sentenced to 46 months in prison, with three years of supervised release, following his guilty pleas to one count of conspiracy to commit money laundering by the Southern District of Florida.

Hernandez was found involved in an alleged conspiracy to embezzle $1.2 billion from Petróleos de Venezuela, S.A. (PDVSA). According to the US Department of Justice (DOJ) prosecutors, Hernandez had been arrested in July 2018 and he had allowed PDVSA’s former finance director, Abraham Edgardo Ortega, to launder $12 million in bribes through his financial advisory firm, Global Securities Advisors LLC.

Towards the end of April 2021, the US Department of Justice (DOJ) had announced that Donville Inniss, a former Member of Parliament and Minister of Industry for International Business, Commerce and Small Business Development in Barbados, was ordered to forfeit approximately $36,000 in bribes and had been sentenced to two years in prison.

This was following his conviction in January 2020 by a jury in the Eastern District of New York on several money laundering charges. Innis had allegedly received bribes from the Insurance Corporation of Barbados Limited (ICBL) in exchange for renewing contracts from the Barbados government to ensure government property worth over $100 million.

At the end of April 2021, the former co-president of US-based logistics firm Transport Logistics International (TLI), Daren Condrey, was fined $12,500 and sentenced to two years in prison with three years of supervised release for bribing to secure contracts.

He had allegedly agreed to pay around $2 million to Vadim Mikerin, an official at a subsidiary firm of Russia’s state-owned uranium company, to secure these contracts for TLI.

Condrey had previously pleaded guilty to wire fraud charges in the District of Maryland for breaching the FCPA in June 2015.

In mid-April 2021, the Eastern District of New York had fined Ramiro Andres Luque Flores $30,000 and sentenced him to four years of probation (including six months of home confinement) following his guilty pleas to money laundering conspiracy charges in October 2017.

Luque allegedly paid bribes worth $3.2 million to Petroecuador officials to secure and retain approximately $38 million worth in oil and gas contracts for Galileo Energy SA, which deals with hazardous waste disposal.

If you'd like to stay up to date with bribery best practices, industry insights and key trends across regulatory compliance, digital learning, EdTech and RegTech news, subscribe to Skillcast Compliance Bulletin.

To help you navigate the compliance landscape, we have collated searchable glossaries of key terms and definitions across complex topics, including GDPR, Equality, Financial Crime and SMCR. We also regularly report key learnings from recent FCA fines. 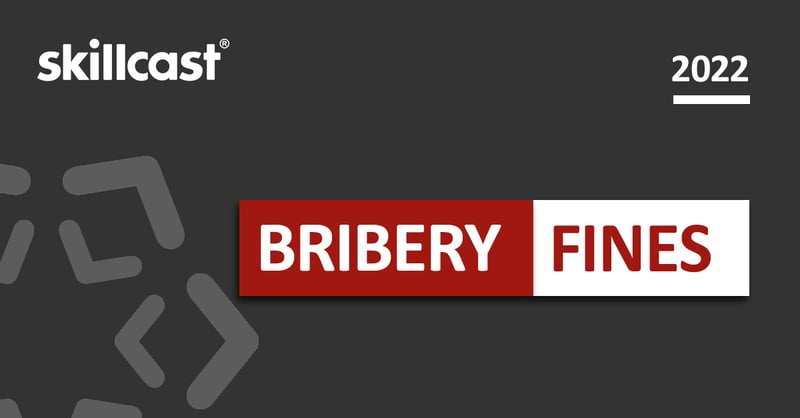 The SFO has a record number of trials listed for 2022/2023, and bribery settlements hit the billion-dollar mark. Find... 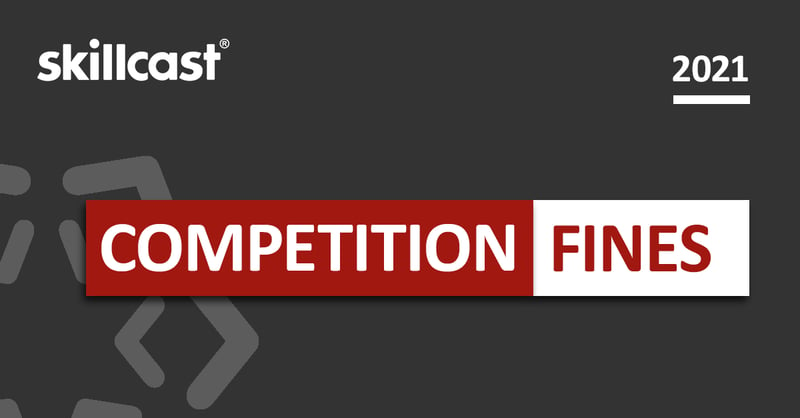 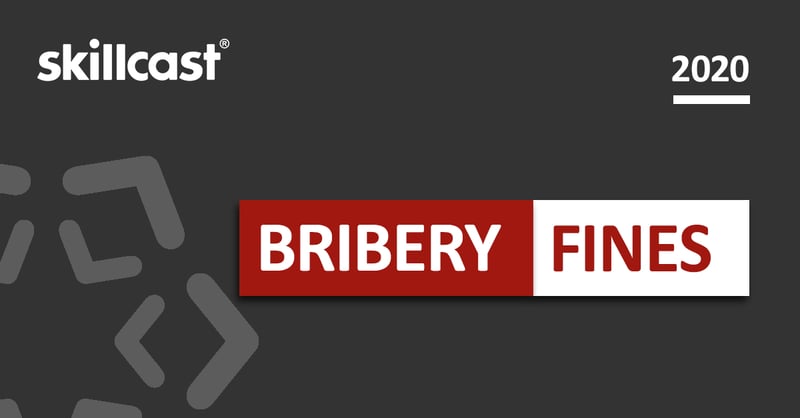 In 2020 we saw some huge penalties for bribery and corruption. But one, in particular, ran into billions of dollars....