The total amount in fines issued for 2022 thus far amounts to £39.2m, with some of the biggest fines on the list being issued in the third quarter of the year.

Failure to have adequate systems and controls in place has been a thorn in the side of many firms on the receiving end of fines, which has brought this issue into the spotlight.

We continuously track the largest Financial Conduct Authority (FCA) fines, including those from 2019, 2020 and 2021.

The biggest FCA fines in detail

The FCA has levied a fine of £12.5m against Citigroup Global Markets Limited for failure to efficiently monitor its trading activity. This fine relates specifically to the 2016 market abuse regulations which required firms to police trading activity across a range of instruments and markets.

Citigroup Global Markets Limited failed to apply these rules which resulted in "significant gaps in its arrangements, systems, and procedures for additional trade surveillance". Over the 18-month period that is in question, Citi earned over £2.5bn for arranging trades.

Breaches of PRIN 2 and 8 - Management of conflicts of interest

The FCA has fined asset manager GAM International Management Limited (GIML) £9,103,523. This fine is a penalty for the company failing to conduct its business with due care and attention and failing to manage conflicts of interest adequately.

The conflicts of interest are related to three transactions - two of which are linked to Greensill Capital (UK) Ltd. Former Investment Director and Business Unit Head at GIML, Timothy Haywood, was the investment manager making the decisions. The FCA has also fined him.

“A robust framework, properly implemented and followed by all staff, is required to manage any conflicts of interest. Gam failed to do this. In an asset manager, this is vital in ensuring decisions are taken for the benefit of the investors."

The FCA imposed a fine of £7.9m on financial services firm, JLT Speciality Limited for bribery and corruption failings. It is reported that one instance of bribery involved more than $3m. The firm was also fined in 2013 for failure to have adequate risk management systems in place to counter the risk of bribery.

Despite the firm's efforts to improve systems and control frameworks, they have failed to take reasonable care to control its affairs effectively by not managing the risk of other JLT Group entities facilitating bribery.

Ghana International Bank (GIB) plc was fined £5.8m for poor anti-money laundering controls over its corresponding bank activities. To reduce the higher risk of money laundering and terrorist financing, the FCA requires banks to carry out additional checks on correspondent banking customers. However, GIB did not adequately perform these checks.

In addition to this, GIB failed to conduct annual reviews on the information that it held on these banks that it had a relationship with and did not provide staff with adequate training to assess transitions properly. Furthermore, there were no policies and procedures in place as guidance for staff.

The FCA fined The TJM Partnership Limited (in liquidation) £2m for financial crime control failings. TJM did not have adequate systems and controls in place to identify and mitigate the risk of being used to facilitate fraudulent trading and money laundering. In addition to this, TJM failed to properly apply its anti-money laundering policies.

Trading executed on behalf of Solo Group's clients was conducted in a circular pattern which is characteristic of financial crime. The firm failed to identify any financial crime concerns or money laundering risks related to Solo Group.

Breaches of Principles 6 and 3

FCA has fined TFS Loans Limited (in administration) an amount of £811k for deficient affordability checks on over 3k guarantors in its consumer credit business. In addition to this fine, the FCA has required TFS to redress the guarantors that were harmed in the process.

TFS' failure to gather appropriate information on guarantors' financial circumstances led to some guarantors being unable to afford the guarantees that they had entered into. Upon investigation, the FCA found that TFS failed to treat their customers fairly or to take reasonable action in organising their affairs responsibly.

"Friends and family members who agree to act as a guarantor for a loved one should feel confident that the lender will treat them fairly. The FCA’s affordability rules protects both consumer credit borrowers and guarantors from unaffordable risks. These requirements are high priority areas for the FCA especially as families face overall increases to their cost of living."

Barclays Bank plc has been fined £783,800 for oversight failings in its relationship with Premier FX. Barclays was the sole banker for the collapsed payments firm.

This penalty reflects that Barclays voluntarily agreed to cover the losses of Premier FX customers whose claims were accepted by Premier FX's liquidators.

Barclays did not make enquiries to ensure that Premier FX's actual business activity aligned with Barclays' expectations. Furthermore, the company failed to identify that Premier FX's internal controls were deficient. The FCA concluded that this was a failure by Barclays to conduct its business with due skill, care and diligence.

The FCA considered the bank's action towards helping mitigate the losses for Premier FX's customers.

"Barclays was aware of these high risks in providing banking services to Premier FX but failed to take reasonably appropriate steps to mitigate those risks. Barclays’ agreement to meet the deficiency in Premier FX’s funds mitigates the actual losses to Premier FX’s customers. This is a significant step to the credit of the bank and has reduced substantially the sanction that otherwise would have been imposed."

APER 2 and 7 - Management of conflicts of interest

The FCA fined Timothy Haywood £230,037 for failing to manage conflicts of interest properly. Mr Haywood received gifts and entertainment that included travelling on a Greensill private aircraft which he failed to record with GIML promptly.

The FCA did not find evidence that the gifts and entertainment influenced Mr Haywood. However, the investigation revealed that the failure to manage conflicts of interest properly increased the chances of him being incentivised to invest.

Both Mr Haywood and GIML agreed to resolve the cases against them at an early stage, which resulted in the qualification of a 30% discount on their fine amounts.

"The FCA expects asset managers and their staff to be scrupulous in identifying and managing conflicts and their risks. This case should send a clear warning to the market."

To help you plan and execute compliance in your organisation, we have created a comprehensive SMCR roadmap.

If you'd like to stay up to date with FCA best practices, industry insights and key trends across regulatory compliance, digital learning, EdTech and RegTech news, subscribe to the Skillcast FCA Compliance Bulletin. 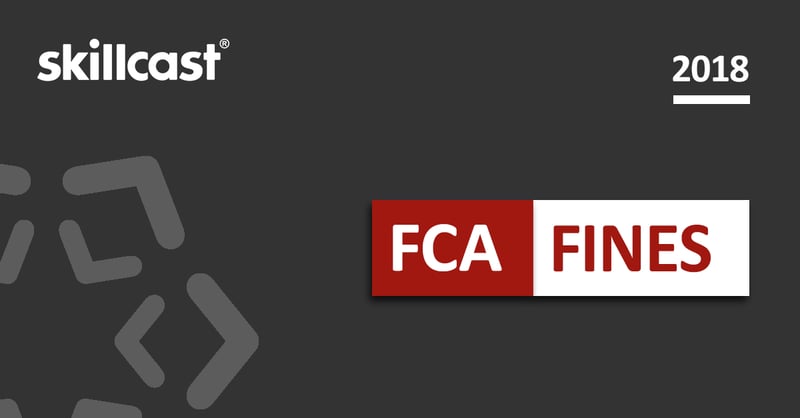 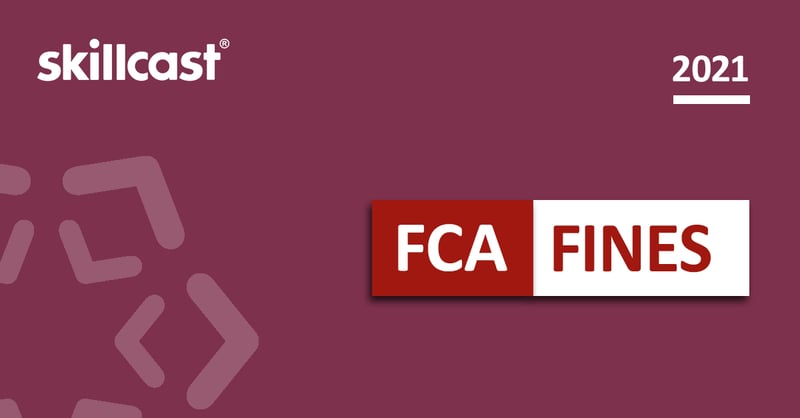 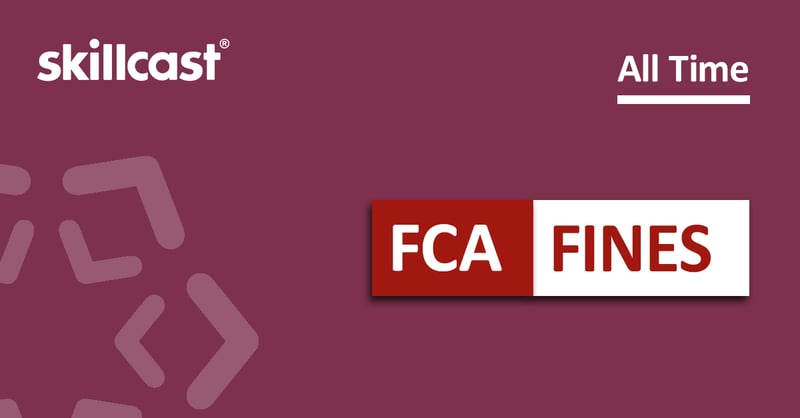 20 Biggest FCA Fines of All Time

The FCA has been issuing fines since 2013, with some years busier than others. Here's a breakdown of the top 20...