Under GDPR, companies have just 72 hours to notify the supervisory authority of data breaches. But it wasn't always like this.

These surprising findings were uncovered by cybersecurity provider Redscan, following a FOI request made to the ICO and analysis of 182 data breach reports.

Mark Nicholls - director of cyber security at Redscan - said, "The fact that so many businesses failed to provide critical details in their initiative reports … says a lot about their ability to pinpoint when attacks occurred and promptly investigate the impact of compromises."

There was some good news though. Financial services and legal services performed slightly better, taking on average 16 and 20 days to report incidents.

For more cybersecurity insights in the financial services sector, check out the FCA's report.

Do your staff know everything they need to about GDPR? If they need a refresher, check out our comprehensive library of 20+ GDPR elearning courses.

There has been an increase of over 80% in the number of modern slavery cases, according to the latest figures released by the National Crime Agency.

From 29 April 2019, the Home Office will become the single competent authority for handling all referrals.

NCA Deputy Director Roy McComb said, "We cannot stop modern slavery alone, we need support and assistance from across the public and private sectors, NGOs and most of all the public themselves."

Do you know what signs to look for? Do you have a Modern Slavery statement? Download a free template and get in touch with us if you need help to conduct staff training for prevention of modern slavery.

Countless scandals, including the LIBOR rate-rigging and multiple insider trading cases, illustrate the challenges many companies face in managing unofficial chat platforms - such as WhatsApp, Viber, Signal and WeChat. But the US Department of Justice (DOJ) has offered a concession.

It has amended the FCPA Corporate Enforcement Policy and will now allow companies to use 'ephemeral messaging platforms' on condition that appropriate business records are kept of those communications.

This is something of a double-edged sword for businesses. While it better reflects the reality - that many people use their personal devices for both work and personal use, companies should now review their policies to ensure there are adequate controls in place.

There is no official guidance but companies should:

From the red carpet to red flag: Bribery in Hollywood

Hollywood stars Lori Loughlin and Felicity Huffman are among 50 people charged with paying bribes to secure places for their children at elite US colleges. An FBI investigation - aptly codenamed Operation Varsity Blues - uncovered the $25m admissions scandal in which coaches were bribed to declare the offspring of the wealthy as elite athletes, insiders were paid to ensure entrance exams were passed and - in some cases - people were hired to sit entrance exams for candidates.

Since 2011, William Singer had conspired with parents to get their children into many of the US's prestigious colleges - including Yale, Stanford, Georgetown and the University of Southern California. The scam was uncovered after a tip-off given to investigators who were looking into a securities fraud.

Loughlin has since been dropped by Hallmark Channel and Netflix.

Over a seven-year period, the firm made £444.7 million from regulated sales of its Geek Squad policies. However, sales staff were not trained to assess customer needs or whether the policy was suitable, often recommending them when customers already had cover. 35% of policies were cancelled in the first three months.

The investigation took place after whistleblowers raised the alarm. The FCA found the company breached Principles 3, 6 and 9 of the Principles for Businesses.

"Without whistleblowers coming forward these practices may never have come to light", a FCA spokesman confirmed.

ING banned from taking on new clients in Italy

ING was fined €775 million by the Dutch regulator last year for shortcomings in its due diligence processes and for failing to report suspicious or unusual transactions over a six-year period.

Prosecutors have now launched an official investigation in Italy alleging ING did not do enough to prevent financial crime. Existing customers remain unaffected.

The European Union has updated its list of jurisdictions considered non-cooperative for tax purposes, otherwise known as the tax haven blacklist.

Five countries that were originally on the list - the US Virgin Islands, Samoa, Trinidad and Tobago, American Samoa and Guam - have now been joined by ten new names - including Aruba, Barbados, Belize, Bermuda, Fiji, and the United Arab Emirates.

Countries such as the UAE have expressed 'regret' at the decision and, along with Bermuda, insist they do cooperate with the EU for tax purposes.

Ministers maintain that its purpose is not to 'name and shame' but instead to prevent tax fraud and evasion and to encourage cooperation and positive action. A decision is expected on whether to include beneficial ownership transparency to the current criteria applied to the list.

A similar money laundering blacklist was spiked after objections from the US, Saudi Arabia and Panama.

Over £100 billion of property in England and Wales is owned anonymously, according to analysis by anti-corruption campaigners Global Witness.

Their investigations have revealed that:

Despite promises to create a register of UK property ownership, there has been little progress so far.

Ava Lee, Senior Anti-Corruption Campaigner at Global Witness, said, "It's increasingly clear that UK property is one of the favourite tools of the criminal and corrupt for stashing and laundering stolen cash. This analysis reveals the alarming scale of the UK's secret property scandal".

This is yet another challenge for estate agents who are already under pressure, following HMRC's crackdown on money laundering.

So far, around 50 estate agents have been visited by HMRC inspectors after a crackdown on money laundering in the property sector, with Tepilo also fined almost £68k.

All estate agents need to register with HMRC and have a legal duty to report suspicious or unusual transactions.

Simon York, Director of HMRC's Fraud Investigation Service, said, "Estate agents need to understand that criminals prey on weaknesses, so it's vital they take all steps to protect themselves. The money laundering regulations are key to that, but there's still a minority of agents who ignore their legal obligations."

Here's a reminder of the key obligations:

Global aluminium producer Norsk Hydro has confirmed that its operations in Europe and the US have been disrupted following a cyberattack.

Hydro announced it has switched production lines to manual mode so it can keep running 24/7. Its global communications have also been impacted. Aluminium hit a three-month high on the London Metal Exchange following news of the attack.

It's the latest breach affecting commodities. In January, IT correspondence was shut down after an attack on zinc smelter Nyrstar. Oil producers Aramco and Rosneft PJSC have also experienced cyberattacks.

Preparedness is vital for both preventing and managing cybersecurity incidents. Some of the key points are:

As the fallout from the €200 billion money laundering scandal continues, Danske Bank has confirmed to shareholders that all its executives would be waiving their bonuses for 2018.

In a 5-hour meeting, shareholders vented their frustration at being dragged into the scandal, with some calling for the bank to be split up and for senior managers to be held personally accountable.

One shareholder - Nanna Bonde - summed up the general mood as follows, "The bank has made a fool out of shareholders, customers and the entire Danish population".

With Danske also facing potential lawsuits from institutional investors, missing out on a yearly bonus could well be the very least of their worries.

For the third time in two years, Google has been fined €1.5 billion by the European Commission for anti-competitive practices.

Prosecutors accused Google of abusing its dominant position (it enjoys more than 90% of the search market) by preventing its rivals placing online adverts on its search results pages.

EC commissioner Margrethe Vestager said, "Google has cemented its dominance in online search adverts and shielded itself from competitive pressure by imposing anti-competitive contractual restrictions on third-party websites. This is illegal under EU anti-trust rules."

This latest fine brings Google's total fines to €9 billion since 2017. However, critics argue that these fines have actually done little to change the tech giant's dominance. Instead, they suggest that behavioural remedies - such as being forced to divest DoubleClick or Waze might have more of an impact.

Download our free Competition Law training presentation and get your staff up to speed. 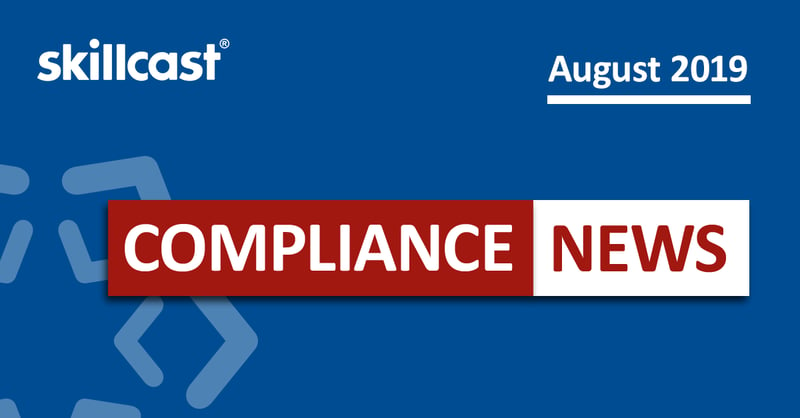 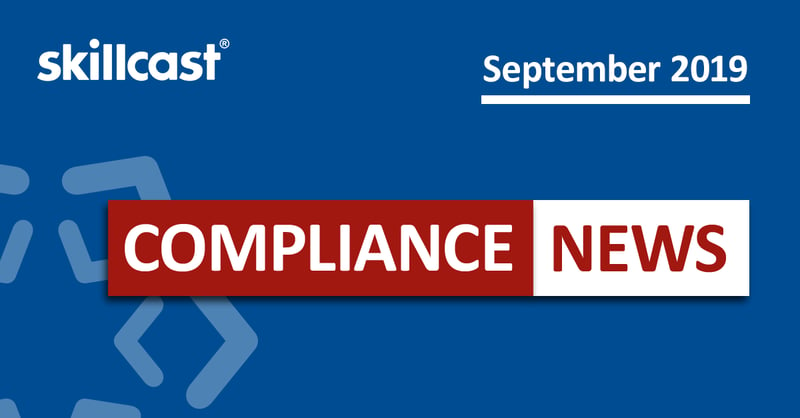 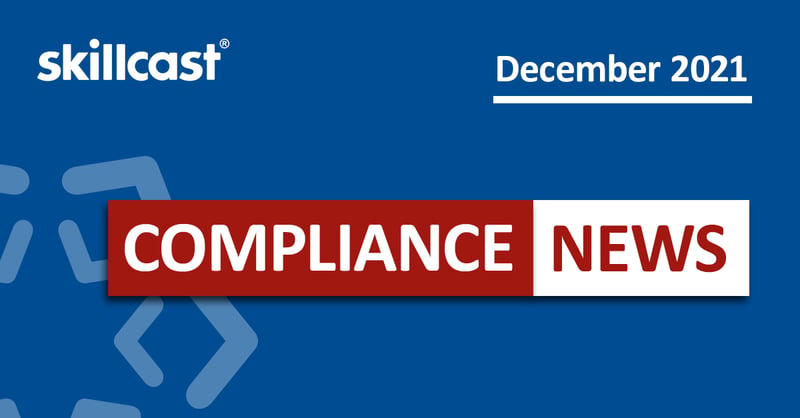