The Financial Conduct Authority (FCA) has fined Bank of Scotland (BOS) £45.5m for failing to disclose information about its suspicions that fraud may have occurred at the Reading-based Impaired Assets team of Halifax Bank of Scotland.

BOS identified suspicious conduct in the Impaired Assets team in early 2007. The Director of the Impaired Asset Team, Lynden Scourfield, had been sanctioning limits and additional lending facilities beyond the scope of his authority undetected for at least three years. BOS knew by 3 May 2007 that the impact of these breaches would result in substantial losses to BOS.

Over the next two years, BOS failed properly to appreciate the significance of the information that it had identified despite clear warning signs that fraud might have occurred. There was insufficient challenge, scrutiny or inquiry across the organisation and from top to bottom. There was also no evidence anyone realised, or thought about, the consequences of not informing the authorities.

It was not until July 2009 that BOS provided the FSA with full disclosure in relation to its suspicions. BOS did not report its suspicions to any other law enforcement agency. The FSA reported the matter to the National Crime Agency (then the Serious Organised Crime Agency) on 26 June 2009.

Mark Steward, Executive Director of Enforcement and Market Oversight at the FCA, said: “Bank of Scotland failed to alert the regulator and the police about suspicions of fraud at its Reading branch when those suspicions first became apparent. BOS’s failures caused delays to the investigations by both the FCA and Thames Valley Police. There is no evidence anyone properly addressed their mind to this matter or its consequences. The result risked substantial prejudice to the interests of justice, delaying scrutiny of the fraud by regulators, the start of criminal proceedings as well as the payment of compensation to customers.”

In 2017, following an investigation by Thames Valley Police, six individuals including Lynden Scourfield and another BOS employee, Mark Dobson, were sentenced for their part in the fraud. The FCA has banned four individuals from working in financial services due to their role in the fraud at HBOS Reading; they are Lynden Scourfield, Mark Dobson, Alison Mills and David Mills.

Commercial lending was and still is largely unregulated in the UK which meant that the activities of the Impaired Assets team were not subject to specific rules imposed by the FSA. However, BOS was required to be open and cooperative with the FSA, and the FSA would reasonably have expected to have been notified of BOS’s suspicions that a fraud may have been committed in May 2007.

Following the lifting of reporting restrictions, the FCA has announced that Richard Baldwin, a luxury-watch dealer, has been convicted in his absence, for money laundering. Baldwin is the sixth person to be convicted as part of ‘Operation Tabernula’, the FCA’s biggest insider-trading investigation to date. He was convicted in July 2017 after absconding from justice during the proceeds.

Baldwin was convicted of dealing in criminal property between October 2007 and November 2008. He laundered £1.5 million, representing the proceeds of a profit from insider dealing in Scottish & Newcastle plc by Martyn Dodgson, a former managing director at Deutsche Bank and Andrew Hind, a former finance director at Arcadia Group’s Topshop. Having received the money, Baldwin dissipated the majority of it using his other Panamanian companies and off-shore accounts. The off-shore companies had the effect of concealing the true source of the funds.

Mark Steward, Executive Director of Enforcement and Market Oversight, said: “‘This case demonstrates our determination to pursue not only those who commit insider dealing but those who are prepared to launder the ill-gotten gains from abusing our market. The case also sends a clear message that the FCA is determined to deprive criminals of the proceeds of crime. We are robust in monitoring Restraint Orders and will take action if breaches occur.”

A European arrest warrant has been secured for Baldwin, and the FCA has appealed for any details of his whereabouts.

Following a decade old investigation, thousands of HSBC customers could be entitled to compensation for ‘unreasonable’ debt collection charges made by John Lewis Financial Services (JLFS) and HFC Bank 10 years ago. (HFC and JLFS are now part of HSBC).

Between 2003 and 2009, customers of HFC and JLFS who fell into arrears were referred to the firms’ nominated solicitors. On referral, HFC and JLFS levied a charge to the account representing 16.4% of the balance as a 'debt collection charge'. The charge was identified as unreasonable by the Office of Fair Trading (OFT) in 2010, as it did not reflect the actual and necessary costs of collecting the debt.

In November 2010, the OFT imposed a formal requirement on HFC to stop adding a collection charge until it had varied or introduced new terms in its agreements with customers.

When the FCA took over regulation of consumer credit in April 2014, it initially decided not to investigate allegations about the conduct of HFC but reconsidered its decision in December 2015, following a complaint to the Complaints Commissioner.

The FCA announced in January 2017 that having conducted a review of the allegations in respect of HFC and JLFS, it had established that approximately 6,700 customers were potentially entitled to redress. In February 2017 HSBC began a voluntary redress exercise to compensate those customers.

On 26 April 2019, the FCA announced that HSBC was expanding its review to identify and compensate further customers who either have or may have paid unreasonable debt collection charges. HSBC confirmed that in May 2019 that a further 18,500 customers who had not previously been contacted were written to as part of this process.

Directors of unauthorised firm ordered to pay £3.4m back to investors

A UK court has ordered Samuel and Shantelle Golding, Directors of the unauthorised firm Digital Wealth Limited and Outsourcing Express Limited, to pass the FCA control of approximately £3.4m in funds held by them, for distribution to investors.

The funds were raised by Mr and Mrs Golding in unauthorised investment schemes operated by them.  The schemes purported to involve the online purchase of wholesale goods from China for onward sale and promised unrealistically high returns, in some cases up to 100% of the amount invested. In fact, the schemes were an unauthorised collective investment scheme and illegal deposit-taking, in contravention of the Financial Services & Markets Act 2000. No significant trading was conducted and the schemes relied on a continuous flow of new investors to fund existing investors’ returns. Mr and Mrs Golding admitted to the Court they were personally involved in these contraventions.

The schemes raised just over £15m from over 1,000 individual accounts. The FCA took urgent enforcement action to stop it and prevent the disposal of the remaining funds. Of the £15m that was raised, £9.25m was paid out to investors as returns and the defendants spent about £2.7m, including significant sums on travel, hotels and retail goods.

Mark Steward, Executive Director of Enforcement and Market Oversight at the FCA, said: “'The FCA took action as soon as it became aware of this illegal scheme, preventing further losses to future investors who would be unable to exit the scheme before it inevitably collapsed.”

The FCA will write to all investors about what steps need to be taken in the distribution process.

Fabiana Abdel-Malek, a former UBS AG Compliance Officer and Walid Choucair, a day trader have each been sentenced to 3 years’ imprisonment in respect of five offences of insider dealing.

Abdel-Malek, who was employed as a Senior Compliance Officer by the investment bank UBS AG in their London office used her position to identify inside information which she passed to her family friend Choucair, an experienced day trader of financial securities, using pay-as-you-go mobile telephones. Choucair made a profit of approximately £1.4 million from the trading.

Abdel-Malek and Choucair sought to conceal their criminal activity by using unregistered pay-as-you-go mobile phones, changing and swapping SIM cards at regular intervals, to communicate with one another. The pair were convicted following an eleven week trial brought by the FCA at Southwark Crown Court.

In sentencing HHJ Korner CMG QC said to Abdel-Malek: “'you were a gamekeeper, using the knowledge you had gained from your employment to become an efficient and accomplished poacher”.

Mark Steward, Executive Director of Enforcement and Market Oversight at the FCA, commented: “Abdel-Malek dishonestly and surreptitiously acquired confidential and valuable information from her employer and passed it to Choucair who made substantial illegal trading profits. Both defendants were well aware they were committing serious criminal offences and engaged in elaborate schemes and lies to disguise what they were doing. This was not opportunistic, but calculated and organised. It was insider dealing at its most venal. The FCA is determined to attack all forms of insider dealing, from opportunistic insiders to those who devise dishonest schemes to exploit and manipulate sources of inside information.”

Other statistics published in the FCA's Enforcement Annual Performance Report  include that during the period 2018 to 2019 FCA:

Interestingly, in the first six months of this year the FCA has imposed 10 fines totalling £319,172,287. This figure exceeds the combined total for the previous three years of £311m.

The biggest fine the FCA has imposed in 2019 so far is the £102m imposed on Standard Chartered in April for anti-money laundering failings that breached sanctions against Iran in the investment and retail bank sector. 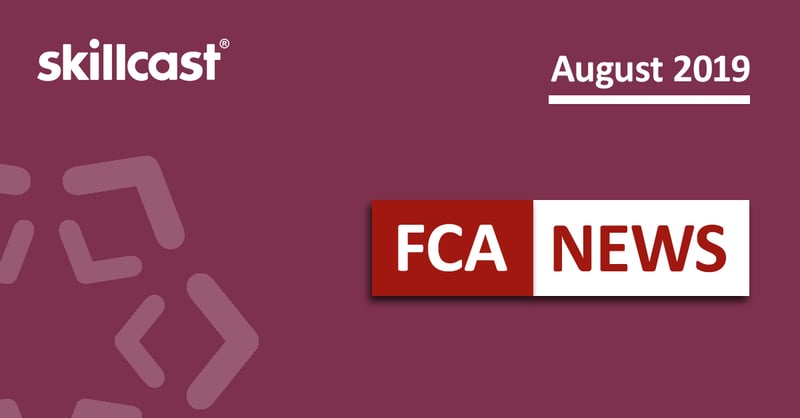 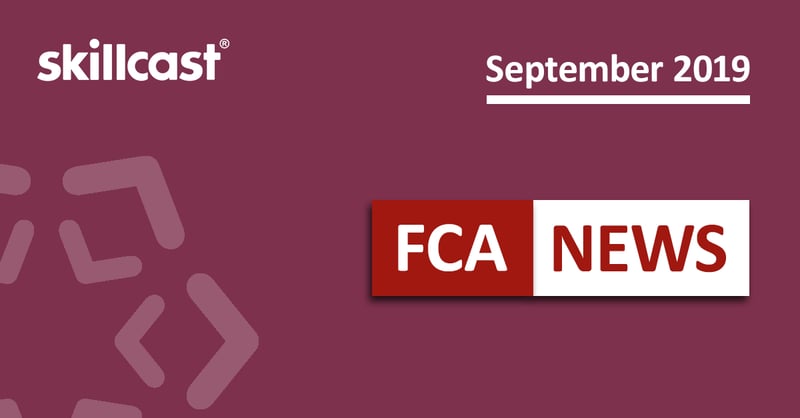 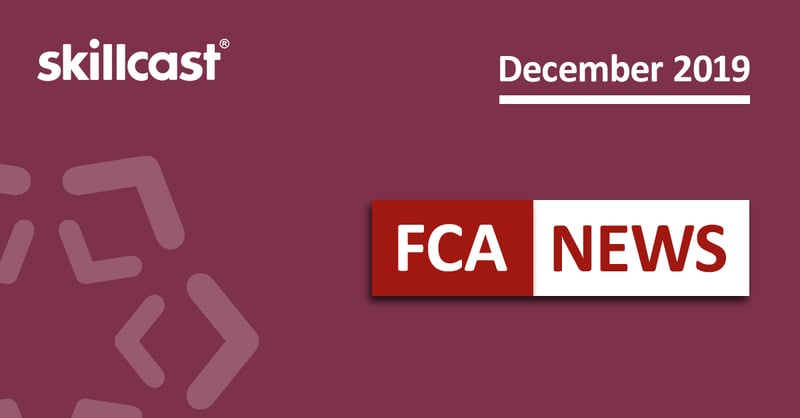