A recent Skillcast survey has highlighted the significant gap between the incidence of misconduct observed by employees at UK firms, and the risk perception of decision makers.

From our UK Corporate Compliance Survey in May 2019,  which covered 4,000 employees and decision makers at UK firms, we observed a significant gap between the incidence of misconduct observed by employees and the risk perception of decision makers. And notably this gap widens the larger the size of the company.

In survey, we asked employees at UK companies if they had witnessed any of the common acts of employee misconduct in the past twelve months. The responses (see Figure 1) revealed that:

To the decision makers at UK companies, we put the question slightly differently. We asked them what acts of employee misconduct they fear most in their business. The responses (see Figure 2) revealed that: 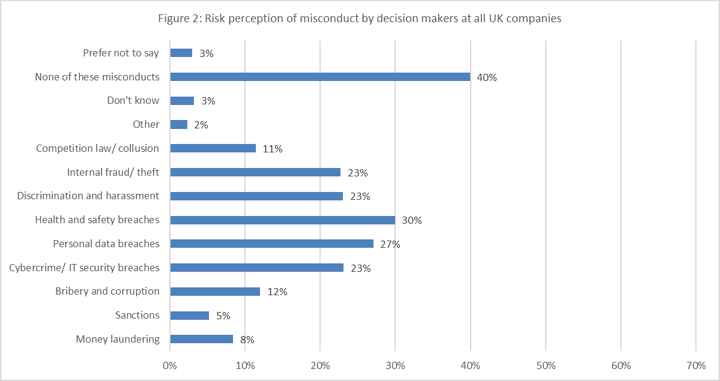 The gap between incidence and perceptions of misconduct

The above findings show that overall, decision makers have a far higher risk perception than the incidence of misconduct observed by employees (see Figure 3).

The incidence of misconduct observed by employees is relatively unchanged irrespective of the company size (see Figure 4). 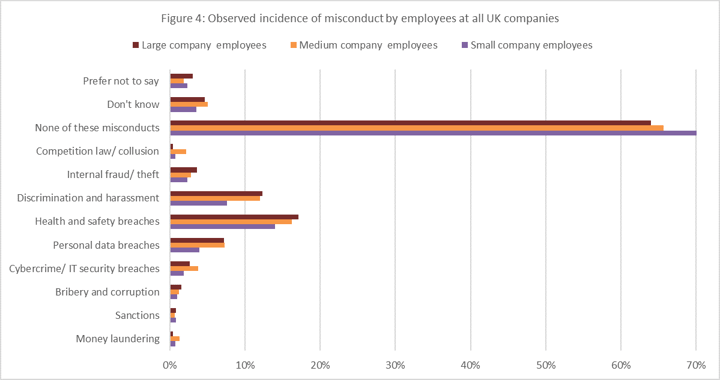 However, the risk perception of the decision makers is vastly different, with those at large firms significantly more worried about employee misconduct than those as smaller firms. 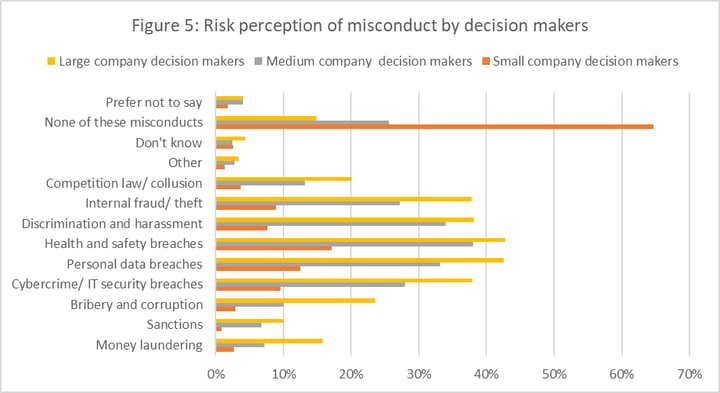 Consequently, the difference between incidence observed by employees and the risk perception of the decision makers is far wider at large and medium sized firms. 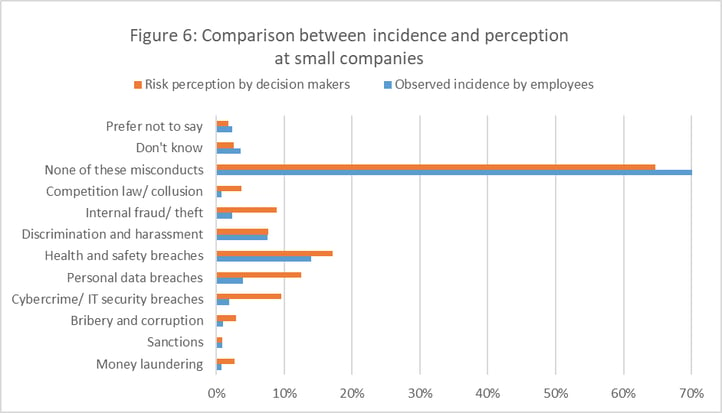 Why is the gap between observation and perceptions of misconduct greater at larger companies?

This discrepancy between small, medium and large firms above is significant and based on the results of polling over 2,000 employees and 2,000 decision makers. Making sense of it though is open to conjecture. A multitude of factors could be at play. We propose two premises below and invite you to add others based on your own experience.

About the UK Corporate Compliance Survey

Skillcast is the leading provider of corporate compliance e-learning and tools to companies in the UK, ranging from FTSE100 giants to small and mid-sized businesses. Given our passion for staff compliance, we commissioned two surveys to assess compliance issues, attitudes and perceptions in the UK corporate workplace.

Our survey was conducted in May 2019 in partnership with YouGov, gathering the opinions of 2,000 employees and 2,000 decision makers. Find more survey results in the Compliance Insights section of our blog.

Feel free to add your thoughts/opinions in the comment section below.

Are you compliant with sanctions laws? We have tips on how to stay up-to-date with financial sanctions & avoid any hefty fines for your company. Sanctions may be imposed on individuals, terrorist ... 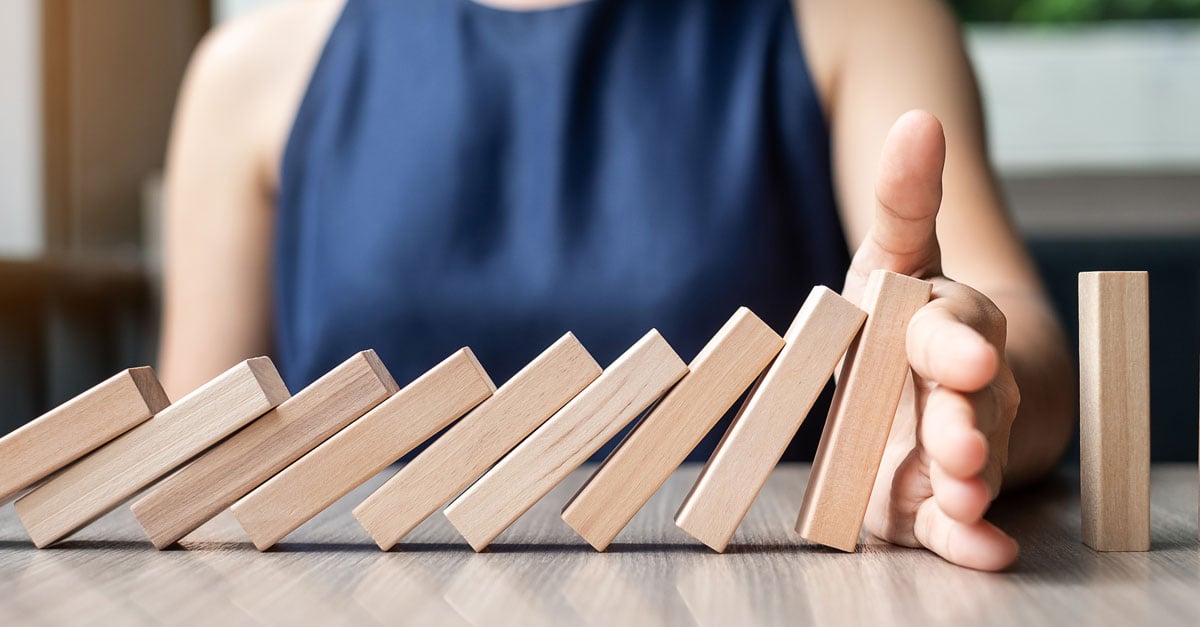 10 Ways to Boost Compliance in Your Firm

Across almost all sectors in business, whether it be the financial sector, energy services, or pharmaceuticals, we are all seeing the impact of growing regulations and sanctions. What is the best way ... 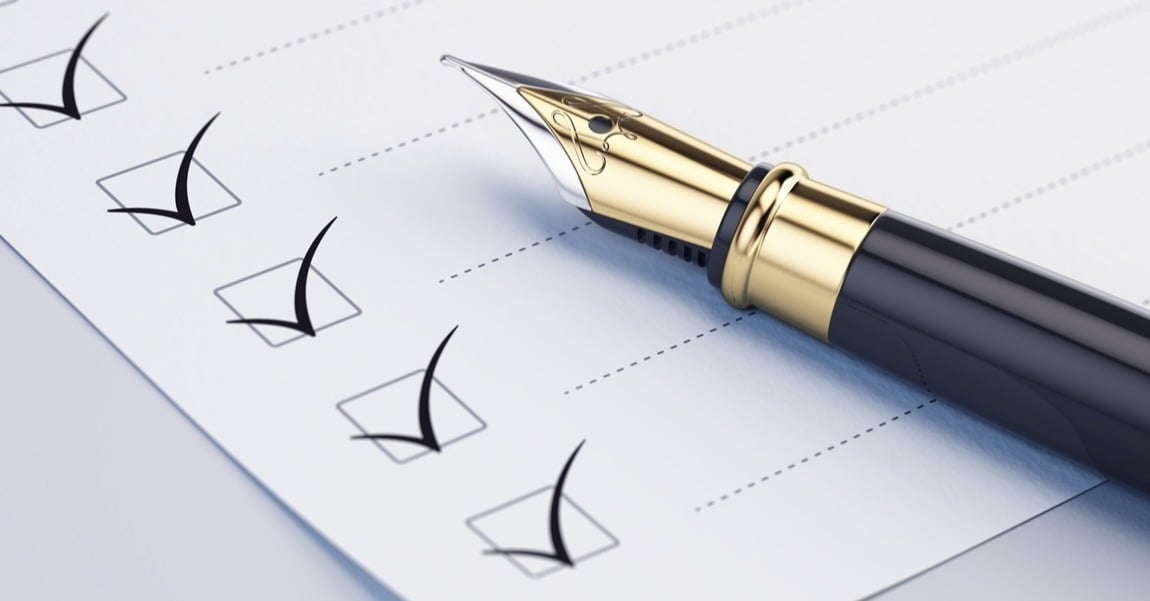 Modern Slavery Statements have been required for all large companies in the UK since 2016. We've created a simple checklist for writing yours, and even an easy-to-use template too. Within Section 54 ... 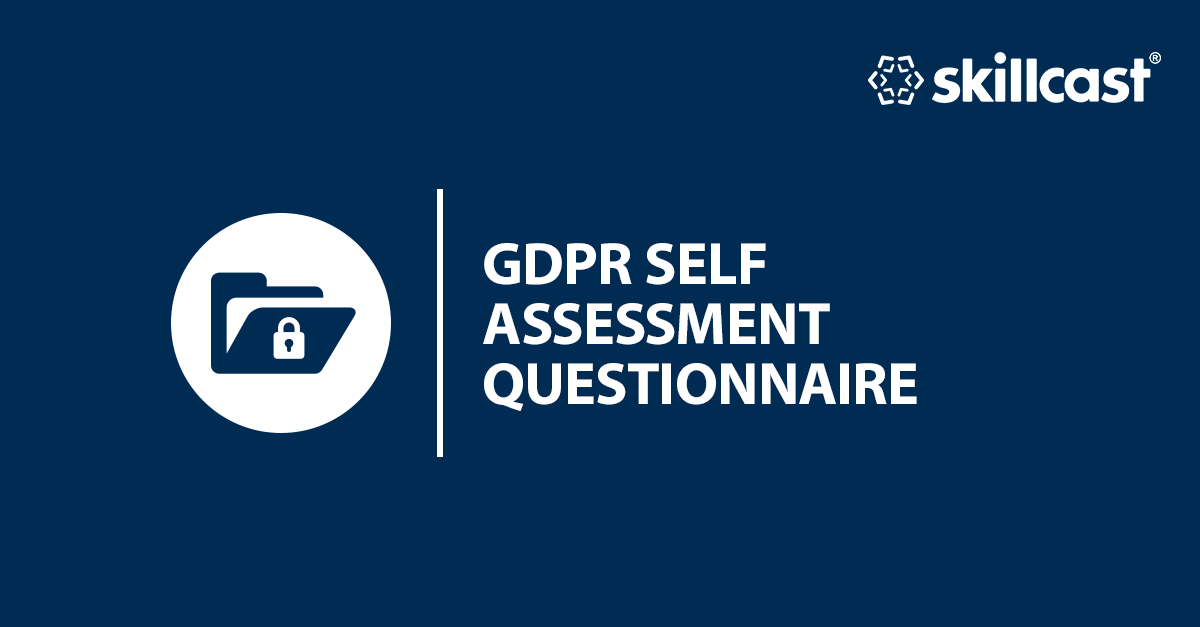 Our GDPR questionnaire will help you to establish effective GDPR procedures and controls, or serve as a benchmark for your existing processes. Assess the effectiveness of your GDPR procedures & ...